About the Cubs vs Reds Schedule and Tickets

The Chicago Cubs and Cincinnati Reds will play each other head to head in Spring Training and regular-season games this upcoming season.

During the upcoming MLB baseball regular season, Chicago and Cincinnati will play each other. If you are looking to purchase tickets for a Reds vs Cubs game in the regular season, you need to choose if you would like to find tickets to a game in Chicago, IL. at Wrigley Field, where the Cubs play their regular-season home games - or a game in Cincinnati, OH. at Great American Ballpark, where the Reds play their regular-season home games.

The Cincinnati Reds and Chicago Cubs both play in the National League Central division, which means that they play each other in the regular season 19 times. Because these two teams play each other so much, there is a lot of history. The first game that was ever played between the two franchises dates back all the way to April, 4th 1890. At the time the Cubs were known as the Chicago Colts. The Colts (Cubs) beat the Reds that day by a score of 5-4.

Since that first head to head matchup between them, the two teams have gone on to play over 2300 regular-season games against each other. The Cubs and Reds have never faced each other in any post-season playoff games.

Venues for Cubs vs. Reds Games

Reds vs. Cubs at Goodyear Ballpark

Goodyear Ballpark in Goodyear, AZ. where the Cubs will visit the Reds in Spring Training

The Cincinnati Reds will host the Chicago Cubs at Great American Ballpark in Cincinnati, OH.

Cubs vs Reds at Sloan Park

The Cubs will host the Reds at Sloan Park in Mesa, Az. for spring training exhibition games

Cubs vs Reds at Wrigley Field 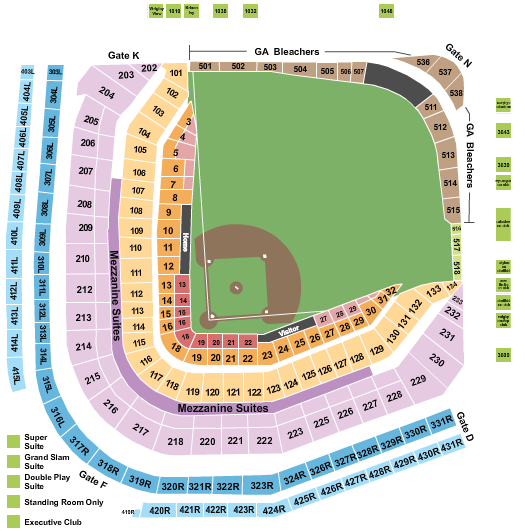 Going to a Cubs vs Reds Baseball Game

For Cubs vs Reds games in Chicago, Wrigley Field opens its gates 1 hour and 5 minutes before game time on Monday - Thursday, and 2 hours and 5 minutes before on Friday, Saturday, and Sunday. The Cincinnati Reds open their gates at Great American Ballpark 90 minutes before the first pitch before each game. Get there early to watch the Reds and Cubs take batting practice and pre-game warmups.

What Channel is the Reds vs Cubs Game on?

How to Find Cubs vs Reds Tickets on CloseSeats

Tickets to see the Cincinnati Reds vs Chicago Cubs are available with the lowest prices located at the top of our ticket listings and the highest-priced tickets at the bottom of our ticket listings. You will find tickets to almost every section for games at Great American Ballpark in Cincinnati, Goodyear Ballpark in Goodyear, AZ., Sloan Park in Mesa AZ.,  and Wrigley Field in Chicago at CloseSeats.

All Cubs vs Reds ticket sales are 100% guaranteed and will be in the section and row that you purchase.

How to Buy Cincinnati Reds vs Chicago Cubs Tickets

How Much do Cubs vs Reds Tickets Cost?

Ticket Prices to go and see a Chicago Cubs vs Cincinnati Reds game is as low as $9.00 for some games. Tickets are available for games at Wigley Field, Sloan Park, Goodyear Park, and Great American Ballpark

Do I Need to Print my Tickets?

No. The Chicago Cubs and Cincinnati Reds, along with all MLB teams, will only allow mobile ticket gate entry to their games.